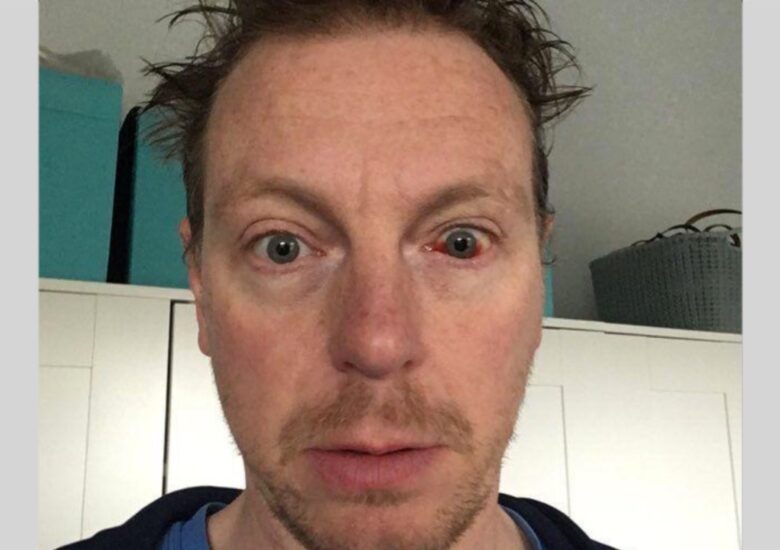 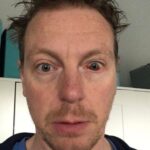 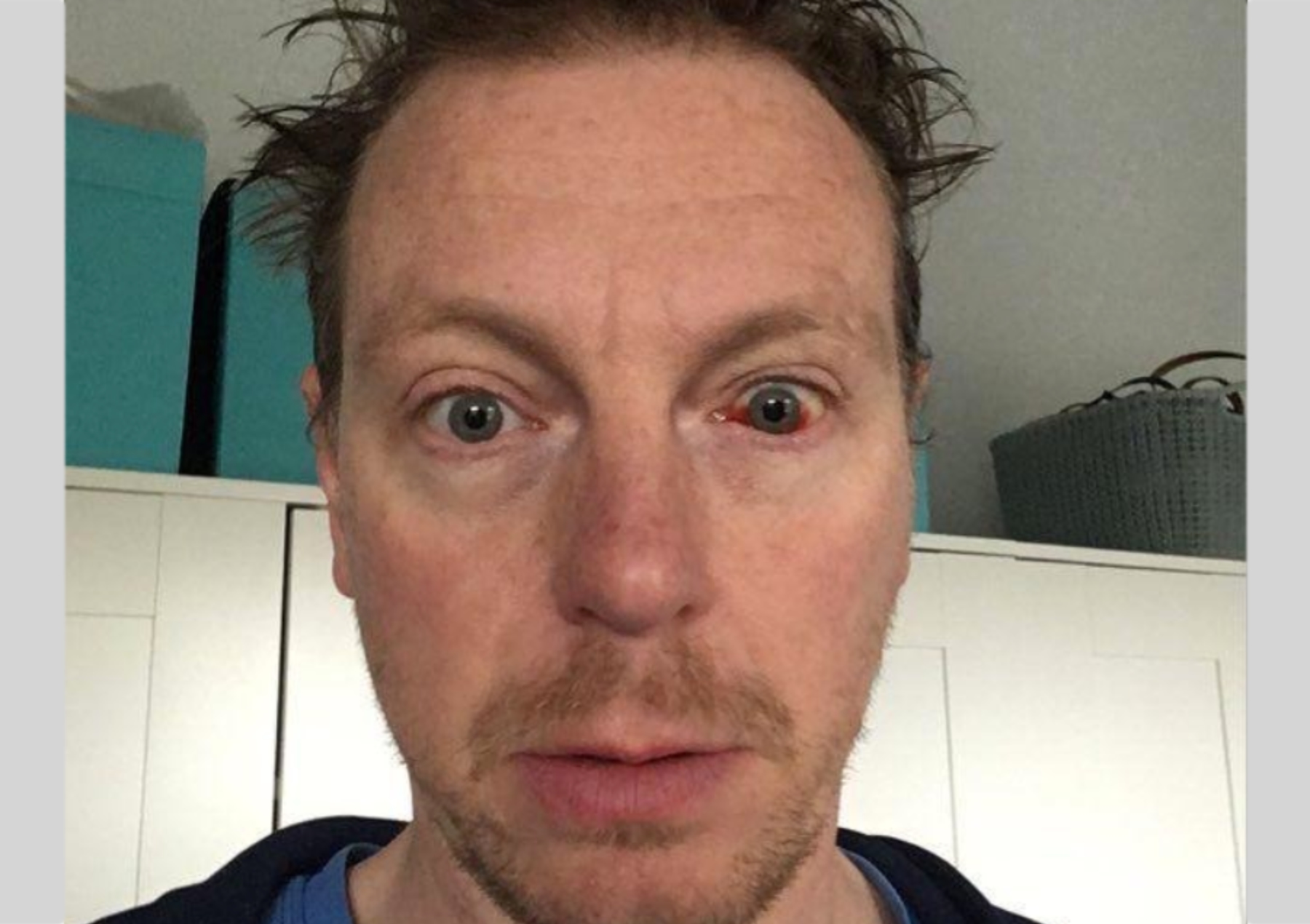 Not sure if I’ll ever get to the bottom of what happened to me but whatever it was it knocked me for six. I’d been working as a teacher until lockdown was enforced on Monday 23rd March 2020 and felt in fine form. As a runner I was building towards a 60 mile challenge and was regularly cycling and running on a daily basis.

The first days of lockdown were a laugh. I spent my time setting online work and teaching my children but in between stole any available opportunity to go for a run or walk. Times were a bit stressful due to my mother in law’s health and therefore when I woke up on the 28th March with a blood shot eye I just put it down to stress. I didn’t feel unwell so had few issues with it so just continued with my work (remotely) and volunteered to help a number of elderly residents in our local community.

I really didn’t think much of the fact I was slowing down in my runs and feeling a bit more lethargic and even ignored the fact that I had a small accident (think Paula Radcliffe?!) whilst out jogging with the dog. On the 14th April, however things took a strange turn for the worse. I returned for a run and couldn’t get enough to drink… not due to dehydration but because my throat was so painful. By the evening my throat was burning and I had developed a strong headache which forced me to bed.

I awoke to a chesty cough. I’m asthmatic so no stranger to a cough and due to the change in weather linked it to hayfever caused by tree pollen. I coughed my way through the day, took some antihistamines and again opted for an early night. Unfortunately the next day brought an even worse sore throat and a hacking cough, coupled with exhaustion and a banging headache. Little tasks became much harder and I found the walk up the hill to my house a real struggle.

The days progressed and the cough got worse but I still remained unworried as I wasn’t experiencing any real fever conditions and my cough was “productive” and the media was awash with calls of dry coughs and feverish temperatures. By the Saturday, however, a friend who I’d been texting (let’s call him Simon cause that was his name!?) suggested that maybe I got checked out as he was a little concerned.

As my local surgery was closed I rang NHS 111 and was put through to a doctor who agreed that it sounded like a chest infection but as I was struggling to breathe and talk on the phone he would prescribe me antibiotics. These were sent directly to my local pharmacy and I was able to collect them in the afternoon. Unfortunately, the pharmacy had locked their email and therefore my prescription was lost in the ether. Repeated efforts to get in contact with the doctor I had spoken to were thwarted and I had to wait until Monday in which time my chest and fitness continued to deteriorate.

Monday came and I eagerly rang my local surgery where I received a very different response from the doctor I spoke to. He told me that I had been given questionable advice and given my symptoms I should immediately self-isolate and assume I had COVID. My wife works in the NHS and I was told to ring her immediately and ensure she returned home from work immediately. Thankfully, my wife’s employers were keen to have her back and therefore rushed through the opportunity to have a test at a time when the centres were just being set up. I therefore found myself bundled in a car to Leeds on the Thursday morning where we took part in the testing process. I was desperate to convince everybody I was fine but spent the one-hour journey coughing repeatedly and had such a reaction to the test that it took me nearly 5 minutes to regain my normal breathing pattern.

By the Saturday, we were amazed to have received the tests and both my wife and I were pleased to find we had negative outcomes. This obviously meant that my wife was able to return to work on the Monday, which she did although she was suffering from horrendous sinus based headaches. My wife has a high pain threshold and very rarely moans (well not about pain anyway) but began to take medication like it was going out of fashion. At the time, we felt it was stress related and were buoyed by the fact we had both tested negative so thought no more about this – it was only in the weeks that followed that this was revealed as a potential symptom.

I continued to deteriorate and as well as a horrendous cough and vast quantities of green sludge being produced I now began to have pains in my abdomen, back and lower legs. I decided I needed to press the doctor again for a course of antibiotics to clear up this chest infection. I rang my surgery who organised me an appointment to meet a doctor the next day. I was to wait in a layby and ring a number and await to be summoned. Unfortunately, overnight I managed to develop another symptom as I realised I could neither smell or taste anything. For someone who loves food and drink this was very disturbing and as I had not been able to exercise for 2 weeks at this point it felt like another pleasure was being robbed from me.

On arrival in my layby, I rang the given number and was a little deflated when the doctor, who had previously denied me antibiotics and told me to self-isolated, answered. I was barely able to speak through my coughing and had to use asthma inhalers to control my breathing. I was interviewed about my symptoms and having admitted I had now lost my taste and smell was asked to wait until the doctor could dress in full PPE before I approached the nearby surgery door.

Within the surgery I was greeted by the doctor who was in a disposable suit, goggles, mask and gloves. He carefully examined me and noted that my oxygen levels were lower than expected and I had a slightly raised temperature. The doctor informed me I should continue to self-isolate and prescribed steroids for my chest and antihistamines (I think largely to placate me as I continued to protest that I just had bad hayfever!). These were collected and I began taking them…

Steroids helped a little but nothing really made a massive difference and certainly my taste and smell deteriorated further, to the point my children enjoyed blindfolding me and putting various concoctions in my mouth. By the weekend I was back on the phone to the NHS as my doctors did not really want me going into their premises. NHS Direct were extremely supportive and referred me to a specialist COVID team. This is where things actually started taking shape as the doctor within the team gave me information which I found very useful. He informed me that I had probably suffered from COVID in the outset but this might have only been a mild case. The unfortunate thing was he felt I had developed a secondary infection in my lungs as a consequence of COVID and it was this that was causing me discomfort.

He therefore advised me on some exercises that might support my breathing and more importantly prescribed the all important antibiotics that I had been demanding from the outset. I was also referred back to my doctors as he wanted me to have my oxygen levels urgently monitored as he felt I could barely get through a sentence on the phone without a shortness of breath. Again, I rang the surgery who did not want me going near it so I had to send a friend to pick up the monitor and instructions. I was told that if my oxygen levels dropped to 94 I should report head to hospital straight away. In honesty, in the first few days my oxygen levels fluctuated around 93 but I felt too tired to sit in A+E to be told I was a non-urgent case, which I clearly was in light of what was being reported in the media at the time!

For the next week I took the antibiotics and spoke to a nurse on the telephone twice a day who recorded my oxygen levels. As time went on, my chest gradually began to improve and the conversations became a little longer as I could actually manage full sentences without coughing. On the day the antibiotics were completed my taste finally came back. Chocolate was the biggest revelation at this point… who knew how good it tasted!

32 days after my last run I finally managed to get out and complete a very slow 5km run. Even now 4 weeks after this point I feel drained and running is still an effort although my strength is returning and I certainly feel that my experience has been mild in comparison with so many others.

I still feel that I was just unlucky and had a bad reaction to chest infection, but the evidence stacks up and certainly as I write down my experiences it seems hard to deny that there is a lot of overlaps with the symptoms of COVID. My wife is scheduled to have an antibody test through her job in the next week so maybe this will shed some light on what actually happened. In the meantime, I’ll just count my blessings and rejoice that I am well again!